An update on the Claustral Canyon story

The Claustral Canyon experience has really evolved in leaps and bounds.

It all started by looking at a beautiful picture of a mysterious canyon in National Geographic that was taken by Carsten Peter in 2008. I fell in love with that picture and it was on my mind all of the time. There was a quality about that picture that was so raw and so primeval. It was hard to believe a place like that could actually even exist.

Eventually my curiosity got the better of me. I knew that if I didn’t go the canyon now I probably never would and I would sincerely regret it later in life. We got in touch with the guides that helped Carsten Peter access the canyon. It turned out the place was very inaccessible, requiring one to wear wetsuits, swim through endless rivers and pools, and descend with ropes down three beautiful waterfalls through an infamous place known as the ‘Black Hole of Calcutta’ before ending up in a long stretch of canyon like a natural cathedral fringed with beautiful giant ferns and long shafts of sunlight. The National Geographic article described going through that place as like ‘being swallowed by the Earth’.

The first time I descended into the canyon with my friend Shane, we were so excited I got literally zero hours sleep. I had two energy drinks as I drove to the canyon that morning. Not that I really needed it – my adrenaline was so pumped up anyway.

We were in and out of the canyon in a few hours. Not nearly enough time to appreciate this extraordinary place but enough time to realize that this was a place unlike anything else we had ever seen in our lives.

Claustral Canyon was so mysterious that people in the nearby town of Katoomba had never even heard of it. When we showed them photos of the place they looked at it and said “is that in the Amazon?” They looked slightly flabbergasted when we told them it was just down the road. Staff at the nearby Mount Tomah Botanical Gardens nearby knew about Claustral Canyon, but to them it was an unknown place somewhere in the depths of the forest. You could look out of the window and see the forest stretching in all directions, and see it dipping dramatically down at various spots and they knew Claustral Canyon was in there – somewhere.

Doesn’t that thought just get your heart racing? 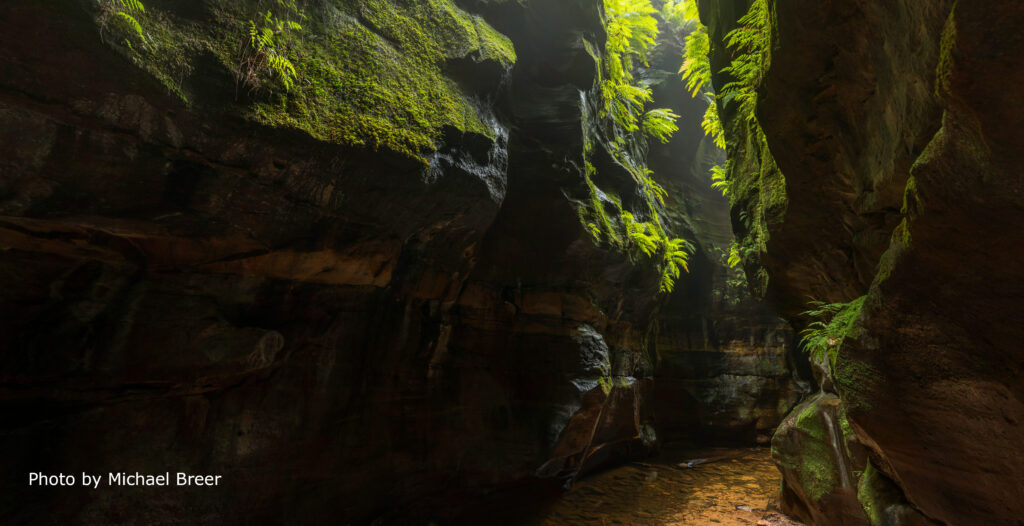 We all have the explorer in us. To me, nothing is more exciting and more enticing that feeling like you are truly discovering a place for the first time. It’s a very special feeling – I think reading Conan Doyle’s book ‘the Lost World’ captured it beautifully. It’s a very hard thing to find in today’s overpopulated planet. I remember where we camped during the filming – to be sleeping under a huge overhanging canyon, where the power of nature is so majestic it’s almost intoxicating, the sound of the water is incessant, the ferns are gigantic, a place where no phone, no internet device works, where you feel like you truly could be living in the Jurassic era.

We launched the “Journey to a Lost Canyon” Kickstarter campaign in 2013 to raise funds to laser scan the canyon and create a 3-D model of it. I think people were slightly surprised we were using an industrial laser scanner, a tool normally used to survey roads and bridges, to scan a canyon in Lidar! Our plan was to create a model that people could explore using gaming technology on a PC. Unbelievably, at this stage we didn’t really know much about Virtual Reality and had never heard of Oculus. It wasn’t until the day before we launched the campaign that a friend, Jesse Waites (to whom I owe an enormous debt of gratitude) told me that Oculus would be doing a presentation in Boston the following day and that their Oculus Rift might be just the device needed to view this experience. When we found out what the Oculus Rift actually did, and that you could feel the canyon was all around you and that you could explore it, we could scarcely hold back our excitement. I remember how excited I was with the word ‘Rift’ and how similar it sounded to ‘Canyon’. This was such a strange and serendipitous event. Next day, we met the founder, Palmer Luckey, with the National Geographic magazine in our hands, and explained that the Rift was made for places like Claustral and that it would allow people access to this beautiful and extraordinary place without having to wear wetsuits, jump into pools, rappel through waterfalls, and avoid tiger snakes. It was like you could take Claustral home with you and make it your back garden. I think he got the point.

The next step was to get consent from the NSW National Parks Service. We were told in no uncertain terms this would not be easy as the Parks Service understandably did not want a virtual experience causing too many people to want to enter the canyon and create damage. On the other hand the Parks Service were keen that people should understand and be educated about the canyon. I think we got filming consent through one strong argument: a virtual experience would allow people to access the canyon, and learn about it, and really appreciate it, without actually having to be there – the canyon would be preserved but at the same time people could learn more about it. Thank you, Aine and Shane, for helping me through this process!

Having successfully raised the funds, and with photographer Michael Breer’s extraordinary photography and guides Gil, Ben, Cillian, and Stuart led by Lucas Trihey, we laser scanned and photographed the canyon in 2014. It was an incredibly exciting experience, culminating in coverage on Australia’s ABC News Network.

We faced lots of interesting challenges on this trip. Lenses would fog up, water was dripping everywhere, everything was damp, batteries would run out without warning, the lighting conditions varied from dark to blinding, we always had to keep an eye out for tiger snakes, and excessive care was needed to mount the tripods so that nothing would fall and break, especially going down the precarious waterfalls. All human waste had to be collected in ‘wag-bags’ and brought out of the canyon. It was a great exercise in diligence and patience. We stank pretty bad after 4 days down there but what a true adventure it was!

We realized very quickly, when putting the experience together, that further trips into the Canyon would be necessary to do full justice to the environment. Laser scanning the canyon was the easy part. The really tricky part was taking enough photographs to ensure that every square inch of the place was covered. With the assistance of Oculus, and Louise Clifton of the NSW National Parks Service, Michael and I went back again in 2017 and this time produced something much better and which gave much more justice to the beauty of the place, culminating in a Virtual Canyon experience at the Govetts Leap Visitors Center in Blackheath where people could experience being inside the canyon on the Oculus Rift. The Claustral Canyon experience was released on the Oculus Store in 2019 and has received very positive reviews.

I could keep going back to Claustral again and again and never grow tired of it. It is a place of absolutely staggering beauty that has to be seen to be believed. It is a natural cathedral of ferns, light, and water. I sincerely believe that Virtual Reality gets you one step closer to feeling like you could actually be there. Nothing will ever replicate being there for real, but I think what the world has not quite yet realized is just what a quantum leap in that direction Virtual Reality has taken. The day is not far off where the quality of a VR headset will be like a high definition TV and everyone will own a headset and visit Nature’s most inaccessible places in this way.

Thanks to everyone: Michael, Shane, Louise, Aine, Lucas, Gil, Ben, Cillian and Stuart, Oculus, and all our Kickstarter supporters, for making this dream become a reality.

Questions? Comments? Get in touch we’d love to hear from you.